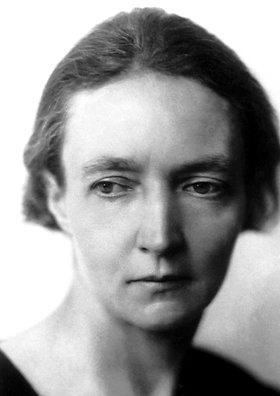 Irène Joliot-Curie was born on September 12, 1897 in Paris, France. She was the daughter of Marie and Pierre, two physicists that shared half of the Nobel Prize in Physics in 1903 with Antoine Henri Becquerel. Following her parents footsteps she also excelled at science and mathematics. She even worked with her mother, Marie Curie at the Radium Institute in Paris. Like her mother, she was committed to science, excellence, research, and discovery.

Irène continued to excel and studied at the Radium Institute in Paris where her doctoral thesis focused on alpha rays of polonium. In 1925 after years of research she received her Doctorate of Science. While she was working at the Radium Institute she met a physicist named, Frédéric Joliot and a year later they were married. A few years later she was appointed as lecturer in 1932, and in 1935 their research paid off. They won the Nobel Prize in Chemistry for their recognition of their synthesis of new radioactive elements. After winning the Nobel Prize in 1937 Irène became a professor and later Director of the Radium Institute in 1946. To learn more about their Nobel Prize Award and others check out NobelPrize.org.

Their discovery led to further studies and tools to help with cancer treatment. After many years working with very hazardous materials Irène was diagnosed with leukemia due to exposure of polonium. Later her health began to decline and she died on March 17, 1956 of leukemia at the age of 58 after a lifetime of exposure to radiation.

Irène Joliot-Curie is a child of two parents that were successful scientists. Similarly, Irene followed a research career path and became a scientist and met her husband who was also a scientist. After getting married they had two children that followed the science career path. Her daughter, Hélène Langevin-Joliot became a physicist and her son, Pierre Joliot became a biologist.

Irène Joliot-Curie was a Mademoiselle Scientist because she was passionate about her research career, discovery and was not afraid to take risks. She was dedicated, intelligent and driven. She knew what research involved because both of her parents were scientists. While learning more about Irene, I came across this quote from her: “That one must do some work seriously and must be independent and not merely amuse oneself in life—this our mother has told us always, but never that science was the only career worth following.” Whether you are a scientist, engineer or in another profession make sure that you are doing a career that you enjoy.

Irène Joliot-Curie kept the science career path going in her family. Do you have a family of scientists? Comment below.

This site uses Akismet to reduce spam. Learn how your comment data is processed.

Martina is the Director and Founder of Mademoiselle Scientist, a digital resource platform to help the next generation of scientists and students.