In honor of Black History Month I was inspired to share my experiences participating in research training, mentoring programs and science organizations. I am grateful for all of my experiences and mentors that helped me become the woman in science that I am today. Coming from an inner city neighborhood and entering a big rural state university was like a dream. My main goal was to get a great education and learn as much as possible to prepare for a STEM career. Everything after that was an added bonus. I joined science organizations and reached out to science peers for support. For the first time I was able to see people in STEM that looked like me and I was determined to use the many resources that my university offered.

I participated in science programs such as the Women and Science and Engineering Orientation and the Minority Undergraduate Research Experience Program. These programs taught me the importance of leadership and strong mentoring.  I gained research experience, scientific knowledge and confidence that I could pursue a science career. This inspired me to use my science background not only to include research but include helping other scientists, especially underrepresented groups.

I encourage everyone to seek mentoring, the earlier the better. If you are looking for science mentors check out research training programs, mentoring programs and science organizations. There is a mentor for everyone. As a Gates Millennium Scholar (GMS) later I went on to become a mentor in the GMS program. Then when I entered graduate school I served on the Graduate Student Association to help first-year graduate students transition.

I am passionate about helping the next generations of scientists. STEM is challenging and fun, but rewarding. At times in the midst of progress I was faced with moments of negativity. There were people who told me that I did not belong and that I would not achieve my goals. I did not let their negativity stop me. I’m sure most of us have experienced negativity or felt alone in science at one point. Don’t let that stop you. Keep moving forward, pave the way and soon there will be others like you in your career. END_OF_DOCUMENT_TOKEN_TO_BE_REPLACED

A few months ago the Science Mentor told me about a new science blogger, La Cientifica. So I went on over to her blog and came across her post, Please Refrain. In this post she shared some of the crazy comments she gets as a woman in science. Here are some of the comments that stood out to me the most:

I can say that I have heard these before. Have you? These comments are inappropriate,  disrespectful, and unprofessional. I remember reading a few articles about this topic and the Women in Astronomy (Is Science in the Eye of the Beholder?) and it does not make sense how common these questions get asked.

When did society make it okay for people to make rude comments to women in STEM? This is unacceptable and has to stop. As a Mademoiselle Scientist I should only be judged by the work that I do, not what I look like. Since I look young and dress stylishly I often get the comments like: “you look so young”, or “real scientists don’t care about how they look, this is not a fashion show” and sometimes I don’t get taken seriously. The last time I checked there is nothing wrong with being feminine or taking pride in my appearance.

Have you ever heard, “you don’t look like a scientist”? Or how about, “You are too pretty to be a scientist”? If so, this has to spot. Let’s come together change the narrative and make a chances so our voices will be heard that we are scientists. END_OF_DOCUMENT_TOKEN_TO_BE_REPLACED

As Black History Month comes to an end and Women’s History Month begins I have spent some time reflecting. In my previous post, I did a spotlight about Dr. Jewel Plummer Cobb who is an African-American research scientist (Cell Biologist/Cell Physiologist) who made great contributions to cancer research. When Cobb entered graduate school there were few Black women in STEM. Now years later, we are still battling this problem. I’m often the only one in many spaces. How can we increase the number of minority women in STEM? What do we need to change?

One way is by having open conversations with each other, participating in forums, having sessions at conferences, developing curriculum for classrooms, hosting seminars at work or joining others online through Twitter Chats. Last month, The National Society of Black Engineers (NSBE) #AAWiSTEM hosted a Twitter chat about empowering African-American Women in STEM. This led to a dialogue of Black women scientists sharing challenges and lessons learned while navigating their STEM careers.

After the chat I reread the American Association of University Women (AAUW) “Why so Few?”. This report addresses the reason behind this and provided solutions to increase more women and girls in STEM.

In regards to the question, “Why so Few?”, how do we move forward? Here are my thoughts:

END_OF_DOCUMENT_TOKEN_TO_BE_REPLACED 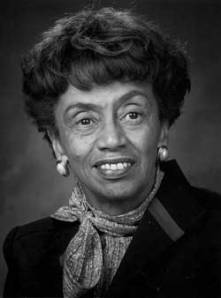 Dr. Jewel Plummer Cobb is a cell biologist/cell physiologist, educator, professor, administrator, and former president of California State University, Fullerton. Dr. Cobb was born in Chicago, Illinois on January 17, 1924 from a middle class surrounded by medical journals and science books at her home library. Her father was a physician, her grandfather was a pharmacist and she became the third generation in her family to pursue a science field. After completing high school she graduated from Talladega College in Alabama in 1944 with a B.S. degree in Biology. Then, she attended graduate school at New York University where she earned a M.S. degree in Cell Physiology in 1947 and a PhD in Cell Physiology in 1950.

Ever since she first looked at cells through a microscope in her high school biology class she knew that she wanted to pursue a research career. She wanted to understand the theory of diseases and as a scientist she would have this opportunity. Dr. Cobb’s research focused on the skin pigment melanin and relation to skin tumors. She tested chemotherapeutic drugs in cancer cells, specializing in cell biology.

In addition to her research she has held several academic positions: Professor at Sarah Lawrence College (1960-1969), Dean and Professor of Zoology at Connecticut College (1969-1976), Director of ACCESS Center at California State University, Los Angeles and President of California State University, Fullerton (1981-1990). She retired in 1990.  END_OF_DOCUMENT_TOKEN_TO_BE_REPLACED

Martina is the Director and Founder of Mademoiselle Scientist, a digital resource platform to help the next generation of scientists and students.